The School for the Blind and Dovecote went on a sensory tour of Speke Hall which gave the James Michael and Kate a chance to link sensory objects to each of the rooms. We had plastic tubes containing different smells such as the smell of coal, cigars, gunpowder, whiskey, vanilla, rose petals, old books, sounds including billiards being played and gunshot, the touch of real fur, crocheted lace table cloths and the taste of rose, violet and mint imperial sweets. The picture below shows Mark using a violin bow on a metal cup in the main hall it made a high pitched sound. 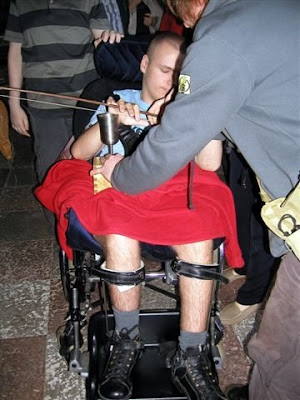 These pictures show Ellie and Mark touching real fur by the mounted Jennet in the corridor. 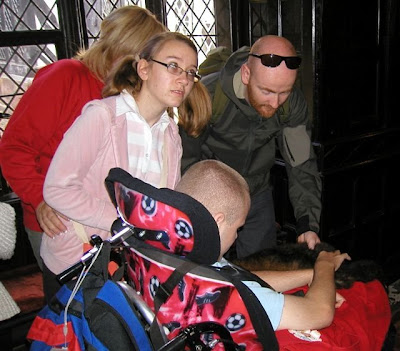 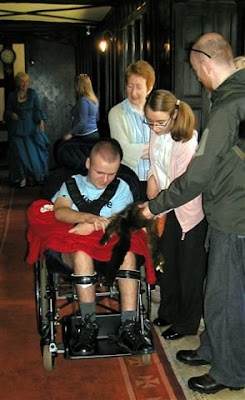 Here's the group outside listening to Jasmin talking about the construction of the house and where we could feel the wood and the wattle and daub the group enjoyed finding out one of the ingredients of Wattle and Daub is cow poo! We also measured how old the Yew tree was by seeing how many people it took to from a circle around it. One of the group mentioned later that the wood panelling made the outline of an aeroplane. 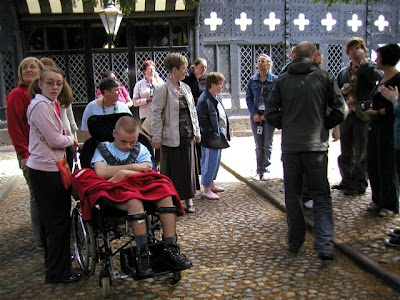 Below are Chris and Linda in the Billiard room, Michael had recorded the sound of Billiards being played and James passed round whisky on cotton wool, and cigars to smell. 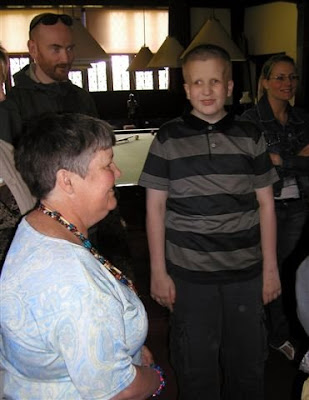 Here's the group in the dining room, they felt the sandstone fire place, they also felt some crochet of a table cloth. On the other side of the room was the barrel organ and the group played miniature musical boxes that work in a similar way to the barrel organ. 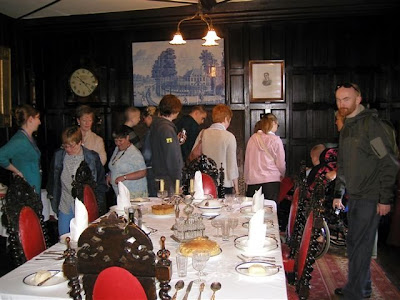 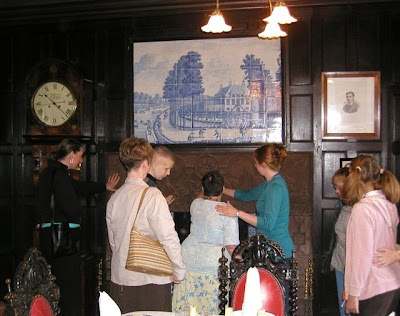 In the Great Hall Fireplace James used a pair of bellows so the group could feel the air on their hands and described how the bellows would get the fire going, some mentioned they could smell the leather of the bellows and Mark said it sounded like a mouse squeaking. The group also got to smell some coal here. 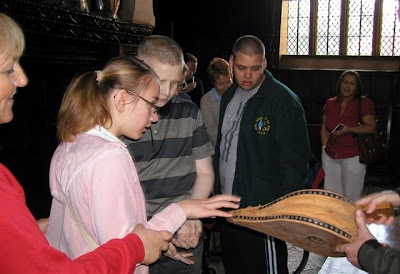 We found that following the tour with multi sensory objects took allot longer than a normal tour, we had to miss out some rooms so we took some of the smells and sounds back to the education room for the group to experience. The picture below shows ginger being sniffed. 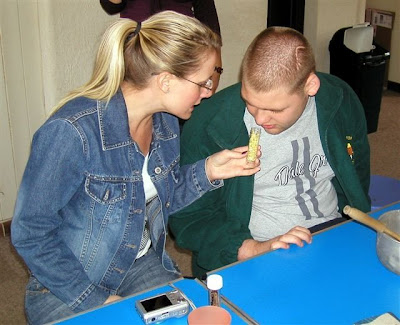 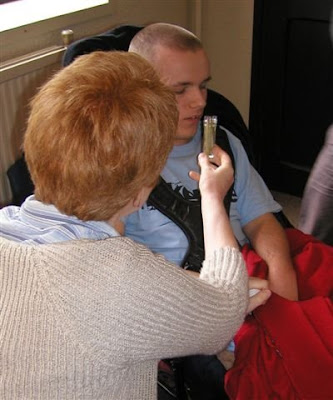 Here's the group sniffing different smells from the Kitchen, vanilla and lemon. 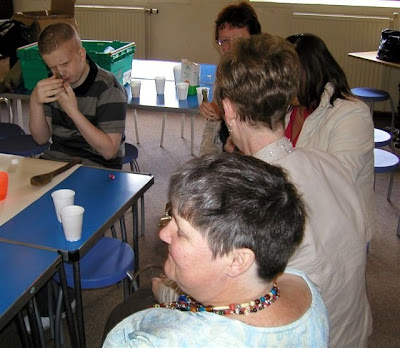 This picture shows Michael and James exploring the possibility of wafting smells out with the bellows before our tour. 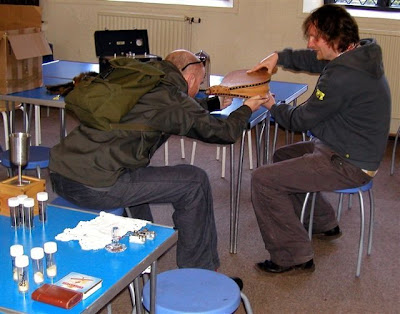 Shelia was asked to photograph each room with a Polaroid camera so we had an instant visual record of each room. Here Theresa and Linda are holding the developing pictures. 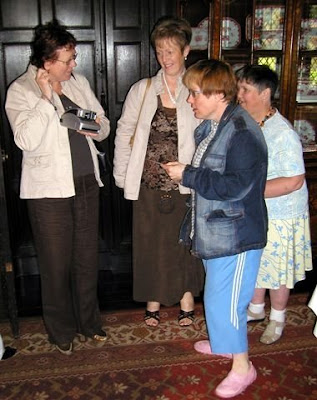 After the tour we asked the group what they could remember from each room then we made a map of their memories using the Polaroids and smells James wrote down the group memories he also asked what shape the rooms were. Some of the group were scared of the sound of the gun shooting but others liked it. 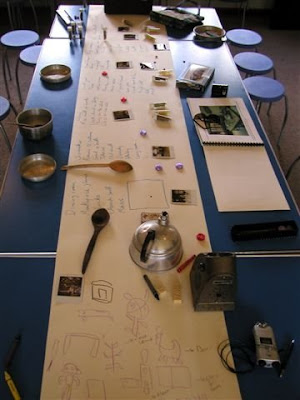 The picture below shows an interesting drawing Chris made as a memory map he remembered lots of things including the feeling the stags horn while looking at the clothes stand made from stags horns, the floor with crosses and the smell of the books in the library. 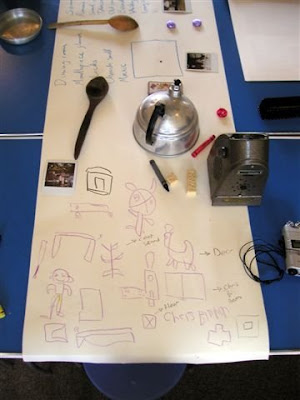 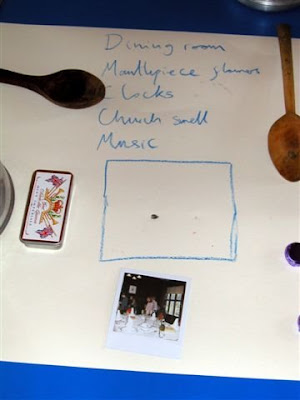 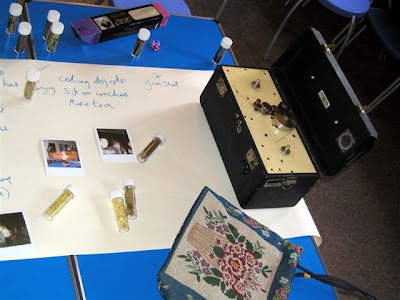 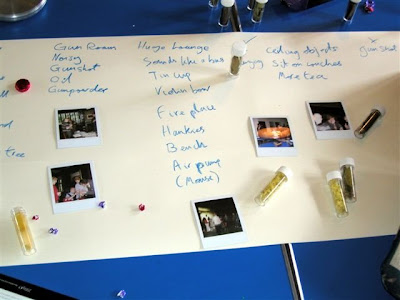 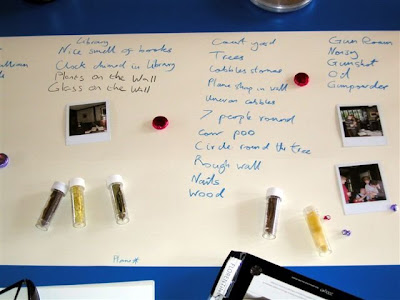 Video below shows sounds from the Great Hall. The group used a violin bow to play a metal cup Mark thought it sounded like the brakes on a bus. Michael also played a recording of an orchestra tuning up ready to play as he imagined the sounds of a performance in the hall which has a minstrels gallery where the musicians would have played.


The video below shows the group sniffing books dating from the 1850's they thought some smelled of gravy!


The video below shows the group playing musical boxes that have a similar way of working as the barrel organ in the dining room.


In the video below the group are in the Billiard room, the group waiting for a Polaroid to develop hear the sound of billiard/snooker being played.


The video below shows the group in the Billiard room smelling brandy and whisky, Mark said it smelt like Christmas dinner.

The video below shows Linda in the Oak Parlour feeling the breeze from a fan, we imagined ladies having tea might have fanned themselves.

The video below shows the group in the Gunroom, there are no guns kept in it anymore but Michael played the sound of a shot gun being fired. The sound scared some of the group, it made Mark jump but Ellie said she enjoyed hearing it.