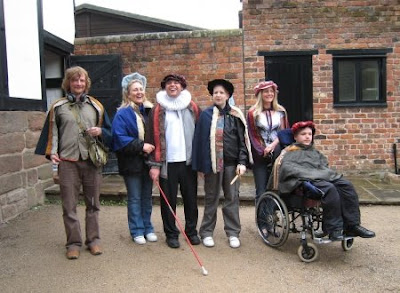 BRITAIN’S deaf and disabled artists were honoured at an award ceremony in Liverpool.
The DaDa Awards 2008 were presented at ACC Liverpool last night to coincide with International Disabled People’s Day.
The event, attended by Phil Redmond and Mike McCartney, also included a dinner, auction and live performances.

The awards included one for community arts event or group, which was won by Liverpool’s Access to Heritage Group.

Ruth Gould, chief executive of organisers, the North West Disability Arts Forum (NWDAF), said: “The standard of work is getting higher and higher for the DaDa Awards, which makes the judging tougher every year to come up with a shortlist.”

I've enjoyed reading your Access to Heritage blog.
I have written about it in my own blog
http://studentswithlearningdifficulties.blogspot.com/2009/04/ideas-from-heritage-project.html